Pandas You Live On

There once was a panda named lu
who ate all this crunchy bamboo
he ate all day long until he looked like king kong
then the zoo didn’t know what to do!

The giant panda is a very unique looking bear that everyone recognizes. Who can resist that cute, cuddly looking animal with its big black eyes?

There once was a panda named lu
who ate all this crunchy bamboo
he ate all day long until he looked like king kong
then the zoo didn’t know what to do!

The giant panda is a very unique looking bear that everyone recognizes. Who can resist that cute, cuddly looking animal with its big black eyes?

Giant pandas are black-and-white Chinese bears that are on the verge of extinction. These large, cuddly-looking mammals have a big head, a heavy body, rounded ears, and a short tail.

The Chinese people call the panda "Da xiong mao," which means "giant bear cat" in Chinese. The panda is a symbol of peace in China.

The first panda came to the United States in 1936 – a cub to a zoo in Chicago. It took another 50 years before the States would see another.

The WWF logo was inspired by Chi-Chi, a giant panda brought to the London Zoo in 1961, when WWF was being created. Says Sir Peter Scott, one of those founders and the man who sketched the first logo: “We wanted an animal that is beautiful, is endangered and one loved by many people in the world for its appealing qualities.”

The Giant Panda, one of the most delightful and captivating of animals, is also one of the most endangered. The best scientific estimates place the number of wild pandas at approximately 1,600.
The giant panda is the rarest member of the bear family and among the world’s most threatened animals

This bear is quite different from other bears. It has unusual cat-like eyes, and its front paws have an opposable "thumb."

Of all the members of the bear family, only sloth bears have longer tails than pandas.

Female pandas are called sows, males are called boars, and the young are called cubs.
Pandas rely on spatial memory, not visual memory.

Adult giant pandas are generally solitary, but they do communicate periodically through scent marks, calls, and occasional meetings. Offspring stay with their mothers from one and a half to three years.

The Red Panda also lives in China and Tibet. In addition, it can be found in Burma, India and Nepal. While the Giant Panda sticks mostly to the ground, the Red Panda spends a lot of time in the trees. It's diet is broader. While it eats bamboo, it also consumes acorns and roots.

The Pandas live at heights between 5,000 and 10,000 feet, in coniferous and broad-leafed forests, which have a dense undergrowth of bamboo. These forests are filled with heavy mist and rains around the year, and are usually cloaked in thick clouds.

Amongst all the species of bears, the diet of the Pandas is the most specialized, comprising almost entirely of bamboo. In fact, in the wild the Panda survives on just two types of bamboo, the umbrella bamboo and the arrow bamboo. It also will eat small amounts of other types of grasses and sometimes the fawns of musk deer and small rodents. In captivity, Pandas have a wider variety in their diet, eating rice gruel, sugar cane, specially made high-fiber biscuits, sweet potatoes, apples, and carrots, apart from bamboo.

The average Giant Panda consumes between 20 and 40 lbs of food per day. They can spend up to 16 hours eating.

Pandas are often seen eating in a relaxed sitting posture, with their hind legs stretched out before them. They may appear sedentary, but they are skilled tree-climbers and efficient swimmers

Unlike other bears that live in temperate regions, and because their food is available throughout the year, Pandas do not go into hibernation. Another reason for this is that their diet of bamboo does not provide them with enough nourishment in order to fatten them for hibernating in the winter.

Scientists are not sure how long giant pandas live in the wild, but they are sure it is shorter than lifespans in zoos. Chinese scientists have reported zoo pandas as old as 35.

Giant pandas reach breeding maturity between four and eight years of age. They may be reproductive until about age 20. Female pandas ovulate only once a year, in the spring. A short period of two to three days around ovulation is the only time she is able to conceive. Calls and scents draw males and females to each other.

Female giant pandas give birth between 95 and 160 days after mating. Although females may give birth to two young, usually only one survives. Giant panda cubs may stay with their mothers for up to three years before striking out on their own. This means a wild female, at best, can produce young only every other year; in her lifetime, she may successfully raise only five to eight cubs. The giant pandas’ naturally slow breeding rate prevents a population from recovering quickly from illegal hunting, habitat loss, and other human-related causes of mortality.

A newborn panda cub is 1/900th the size of its mother and is comparable to the length of a stick of butter.

When cubs are born they are blind and very small. They weigh from 3 to 4 1/2 ounces whcih is about the size of a chipmunk. They start out with fine white fur and will get the correct colored fur within a month of birth. Giant panda cubs are eating bamboo by the time they are 5 to 6 months old and are fully weaned by the time they are 9 months of age. At one year of age, the cubs normally weigh about 75 pounds of bamboo.

People can't tell if a baby panda is a girl or a boy for four years.

Pandas are pink when they are born.

This means a wild female, at best, can produce young only every other year; in her lifetime, she may successfully raise only five to eight cubs. The giant pandas’ naturally slow breeding rate prevents a population from recovering quickly from illegal hunting, habitat loss, and other human-related causes of mortality.

The people of China have been cutting down bamboo forests for houses and farming.
When bamboo becomes scarce, pandas have nowhere to go for a new supply and their habitat becomes too small for them to survive.

In order to save the giant panda, millions of dollars are needed to establish wildlife reserves, relocate people currently living within the reserves, educate the public about wildlife conservation, stop poachers, and plant bamboo.

Fortunately, a lot of people around the world like pandas and are concerned about their future. Educating people world-wide about the giant panda's possible extinction has begun to pay off and many realize that one of their favourite zoo animals may not be here for their grandchildren to enjoy unless they do something.

What is being done to protect giant pandas?

To save panda habitat, the Chinese government has set aside 12 nature preserves where bamboo flourishes and giant pandas are known to live. Fragile panda habitat will be protected from development by people and also from damage caused by cattle, sheep and goats as they graze on any emerging seedlings and trample the thin mountain soil. Efforts are being made to introduce pandas to new areas not currently occupied by it in order to expand its habitat. Strips of land, called bamboo corridors, have been created to help pandas migrate or move from one area to another.This technique opens more habitat to pandas. When pandas move greater distances to find mates, they can spread their genes further in the population

Wildlife Trust scientists and educators are working on similar solutions for many endangered and threatened species, including jaguars in Brazil, river dolphins in Argentina, elephants in India and Sri Lanka, zebras and asses in Ethiopia, and storks in Indonesia! A combination of science, innovation, and community support helps them find ways to save animals and their habitats all over the world.

Pandas are rare today and are protected by law in China. In 1963, the first panda was exhibited in a zoo outside of China. Today, there are more than a dozen pandas in most zoos. Pandas can be seen in zoos in Washington D.C, Mexico City, London, Tokyo, Madrid, Paris, and Berlin. All pandas in zoos are given double names; this is a Chinese custom, which indicates affection. Scientists study the zoo pandas in hope to learn how to save wild pandas from extinction. There are only about 700 to 1000 pandas alive in the world today.

The first step taken was in 1958 when China established the Wolong National Nature Reserve to protect Giant Pandas. In the 1990's, several laws were enacted to help their survival in reserves, including gun control and removal of human residents. But their status is primarily due to habitat loss, which means their only real hope of returning to healthy figures is by reversing trends in deforestation and human disturbance of the forest.

How to Save Endangered Pandas? I want to do this! What's This?

1. Support captive breeding programs in the United States and around the world. With low birth rates and reproduction issues, breeding in captivity is an important aspect of panda survival. Visit zoos that have captive pandas.

2. Donate money or time to an organization dedicated to protecting endangered pandas. Although wild pandas are only found in China, conservation organizations are found around the globe. Choose to donate money online or offer to volunteer if the organization is located close to you.

3. Sponsor or adopt a panda. Zoos and other organizations often support their efforts by having individuals "adopt" or sponsor a particular animal. With sponsorship, you might receive pictures and information about your specific adoptee. This makes a great gift for children or individuals who like pandas.

4. Grow bamboo. Some zoos in the United States accept bamboo donations from individuals. Contact a zoo with a panda near you to see if they have such a program and what the requirements are.

5. Learn about the Chinese government's efforts to maintain panda habitat and save endangered pandas. Government efforts include turning land back into forest, promoting high yield crops instead of logging and promoting population control.

6. Avoid products that are made from animals who share habitats with pandas. Poachers and hunters of other species threaten pandas through snares, traps and other hunting methods.

deepshikha is a writer at Expertscolumn.com. 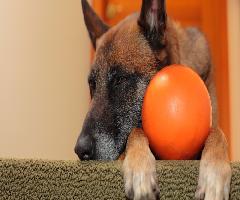 10 Tips To Exercise Your Dog And Keep Him Happy

If you either own or are looking to own a dog, but run a busy schedule here are 10 wonderful ways to keep them happy and well exercised. Dogs are very energetic creatures.